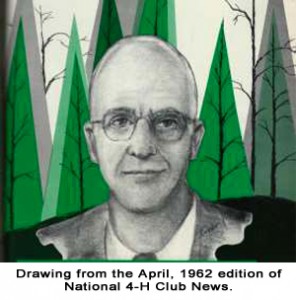 Looking back on the early days of rural youth work from our present vantage point of well-developed programs and clear lines of operation, it’s hard to realize the bewildering array of choices that faced the pioneers of this great 4-H program. But in the days of T. A. “Dad” Erickson’s first work with youth clubs in Minnesota – just after the turn of the 20th century – the direction this movement would take wasn’t clear at all.

That’s why today’s 4-H members owe such a debt of gratitude to Erickson and his contemporaries. In spite of their lack of a pattern for the future, those men and women had the foresight to set up a youth organization with a level of standards so high that today the name 4-H is synonymous with quality the country over.

His early childhood prepared Erickson for a life of service to youth. Theodore August Erickson was born in 1871 near Alexandria, Minn., the second son of a farm couple from Sweden. His parents, while calling on the help of the children with the hard farm labor, saw that the youngsters had time to enjoy the fields and woods for their natural beauty.

Erickson’s influences on today’s 4-H and general agriculture are so many that to list them all is nearly impossible. Here are a few:

Perhaps Erickson’s greatest contribution to 4-H, friends reflect, has been his continual emphasis on the character-building value of the youth program. In the early days of 4-H, much stress was laid on the project or subject matter side of the program. The Minnesota leader’s vision kept 4-H sights raised higher than simply the production goal.

The years of Erickson’s life are rich with lesson-bearing experiences for today’s 4-H workers. They include 11 years as a country school teacher, 10 years as a superintendent of schools in his native Douglas county – where he instituted many club work firsts, two years as rural school specialist at the University of Minnesota before his title changed to state leader of boys’ and girls’ club work in the rest of his 28 years in the state 4-H office (until 1940), and 14 years at General Mills as rural services consultant – where he developed 4-H literature now in wide national usage.

Since his retirement in 1954¸Erickson has served the cause of rural youth from his home in St. Paul. In a letter to a long-time friend which Erickson wrote in 1956, he summarized his 4-H philosophy in these words: “Some folks still think 4-H is only the story of corn, pigs, bread-making, canning, prizes, awards and events.

“In this story (referring to his autobiography, ‘My Sixty Years With Rural Youth’) I have tried to tell how 4-H has helped rural youth and their parents see that they can really live happy lives in farm homes and that agriculture is a great calling presented by the Creator ‘to dress and to keep’ what He had given them.”