In the spring of 2012, I was still relatively new to the Extension Service and very new to the world of 4-H as I had originally been hired in Extension’s Community Resources & Economic Development unit. So, when I was asked to teach the Heritage Class at Older 4-H Members’ Conference (OMC – one of our three major state camps for 14-21 year olds), I was both excited and terrified. I had not grown up in 4-H, and a year before this I could not have told anyone what the four Hs even stood for; now I was being asked to teach a two-hour class for four days at a major camp. “These kids will eat me alive!” was my first thought, but then I began looking for resources to plan my lessons.

I had learned that Heritage Class had become a little stale in the past couple of years, where students made small heritage crafts and the like, and it was not very exciting. I also learned that the mission of OMC is to develop leadership, so I decided to take a new approach with the class. I wanted to focus on a different topic each day, and for there to be meaningful discussion with those in the class.

As I was putting my ideas together, I spoke with our state 4-H leader, Debbie McDonald, who was very supportive of my thoughts for a revamped Heritage Class. She gave me a card for the National 4-H History Preservation Team, and suggested that I look at their website for guidance. When I looked online, I could hardly believe all of the amazing resources that came pouring out! I was able to develop the four topical days regarding the history of 4-H and music in the 4-H program just from what I found on the website.

My favorite use of the site came from the section on 4-H films. I decided to make the final day of my Heritage Class into “movie day,” because the campers were tired and needed some time to relax. But I also determined that our movie must fit our goals, and that we would have a discussion. The 4-H History Preservation website lead me to the film “The Green Promise” staring Walter Brennan and Natalie Wood. When I previewed it, I found the film to be a bit dated, but I thought that it still had a great message, could certainly be used for programming, and might be something that the Heritage Class participants would enjoy. 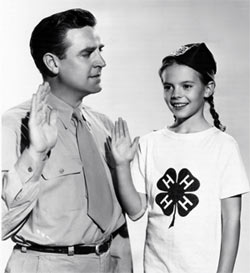 Robert Paige inducts child star Natalie Wood as a member of 4-H in “The Green Promise,” a Glenn McCarthy production for R-K-O release in which Marguerite Chapman and Walter Brennan co-star.

I could never have dreamed how much the kids in my class loved and appreciated this film! They hung on every word, and when it was through they had a great discussion about the film’s message, the time period in which it was made, what about it was relevant or not relevant to today, and a host of other topics. I could not have been more excited. It was at the end of that week that I knew 4-H was the right place for me.

A few months after that class, the Extension Service moved my appointment to the 4-H Youth Development Unit as the Cultural Resource Specialist, and I became the first full-time Extension Historian and the Historic Preservation Officer of Jackson’s Mill State 4-H Camp.

Now I use the National 4-H History Preservation website on a regular basis, and it is one of the first resources to which I point anyone when they are looking for any aspect of 4-H history. I have used the site to develop curriculum, write flag ceremonies, and to allow others to appreciate all of the culture and heritage that is enveloped in the 100+ years of the 4-H program. As a new member of the 4-H family, I now proudly say the 4-H Pledge, sing “The H’s Four,” and use the myriad resources available to promote the heritage of the best youth development program the world has ever seen. 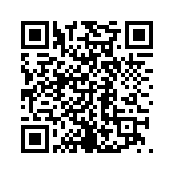