At a recent NAE4-HA conference two 4-H Extension agents were having a discussion. One was overheard posing a question to her colleague, “Did you know a 4-H Congress was once held in Chicago?”

For those of us old enough to have actually experienced one or more of the National 4-H Congresses in Chicago (which were actually held in that city for over 70 years), that comment would probably be a shock. But, then again, the last 4-H Congress in Chicago was 24 years ago. There may well be no need for a young Extension agent to know about these Chicago events. 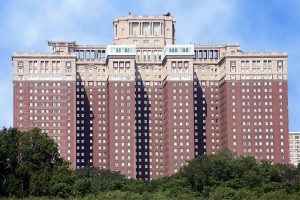 But, yet, there is. National 4-H Congress in Chicago is a large part of national 4-H history. It was the premiere event on the annual 4-H calendar. It was the showcase for 4-H to the entire American population. It was the culmination of individual 4-H project achievement which extended from the club level to the awarding of scholarships in Chicago. Tens of thousands of 4-H’ers accomplished project work for six, seven, eight or more years with a goal of becoming a state winner and going to Chicago.

The history and the memories of National 4-H Congress in Chicago must be preserved. For over five years the National 4-H History Preservation team has been researching, documenting and writing this history… over 200 pages of history and still not complete! We will never be able to tell the whole story. It really cannot be done. Plus, much of the history, the records, the programs and the photos have been lost.

Guy Noble, director of the National Committee on Boys and Girls Club Work (a predecessor to National 4-H Council), who conducted the first Armour tour of boys and girls in Chicago in 1919, and continued on with National 4-H Club Congresses for over 30 years, explained that National 4-H Club Congress cannot be described on paper. One has to be a part of it and “feel” it to fully comprehend it. Perhaps Noble was correct. Clayton Yeutter, U.S. Trade Representative and architect for NAFTA, and later U.S. Secretary of Agriculture, often remarked to audiences that every time he walked through those doors of the Chicago Hilton, chills of excitement ran down his spine remembering back to that first time he entered the Hilton’s lobby as a young Nebraska 4-H’er coming to 4-H Congress.

The Federal Extension Service Weekly Newsletter for December 10, 1970 began with a feature by Walter John, director of Information Services, FES, U.S. Department of Agriculture. Titled “4-H Congress Greatest Youth Happening in Today’s World,” John commented on the event upon his return to Washington, D.C. from Chicago. Referring to 4-H Congress, he explained, “It had just about everything that appeals to youth – serious discussion, entertainment, awards, good food, music, dancing and lots of public attention.” He went on to express his admiration for the tremendous interest and participation shown by the individual national and regional donors. “The National 4-H Congress is the epitome of success in joint action of government, education and industry in helping youth find its role in this world.” 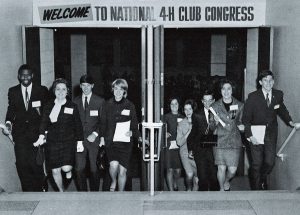 The delegates to Club Congress were the top achievers in the National 4-H Awards programs, year after year. Many of them had worked untiringly for years to win their trip to Chicago. They had diligently assembled project record books which were judged by a national 4-H record judging committee. For many, if not most, their trip to Chicago to attend 4-H Congress was the crowning achievement of a 4-H career as a member. It was their goal. For those who received 4-H award scholarships while in Chicago, Club Congress had even more meaning. It often helped them to go to college and to choose a career. So what made 4-H Congress so very special? For many delegates it was a week of firsts. Some had never traveled on a train or airplane. Staying in the largest hotel in the world. Some had never ridden in an elevator… and the Conrad Hilton Hotel had an elevator lobby with at least 10 or 12 elevators… in the early days all manned by courteous elevator operators. For many, to sit down at an elegant banquet and be served by dozens of waiters in white coats and gloves, live music playing and face a place setting with china and crystal and six or eight pieces of silverware… definitely a new experience.

The history segment on National 4-H Congress-Chicago is near completion and will be in the National 4-H History section (at the bottom under 4-H Program Events) on the History Preservation website: http://4-HHistoryPreservation.com/History_National.asp

Over the next several issues of the 4-H History Newsletter we will be featuring various aspects of this very important event in 4-H’s history… the one that was held in Chicago!

We welcome your comments at: Info@4-HHistoryPreservation.com 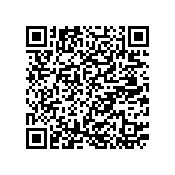