This is the ninth in the series of 10 articles, reprinted from 1962 National 4-H News, which featured people identified by Extension Service professional staff members as “folks who helped make 4-H great”. 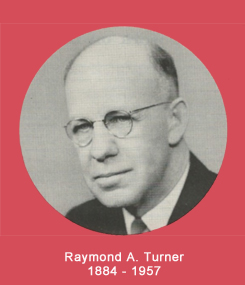 To witness the effect of Ray A. Turner’s work upon modern 4-H, one need only attend any meeting of an individual 4-H Club. For this pioneer of club work touched so many phases of the great youth movement that his influence is almost everywhere present in 4-H activity.

For example, the singing of a 4-H song reflects his work (with Fannie Buchanan of Iowa) in editing the first National 4-H Song Book in 1929 and his work on later revisions. Each use of the 4-H name and emblem mirrors his long-time chairmanship of the federal committee authorized to grant permission to use these Congress-controlled symbols.

Every entry in a 4-H record book has a link back through the years to his work in creating the original system of judging 4-H records at the national level. (This system has been revised and improved with time, of course.)

In fact, his role as one of the leaders in establishing the 4-H Subcommittee of the Extension Committee on Organization and Policy (ECOP) has had at least a remote influence on every policy in 4-H Club work today.

Visitors at the National 4-H Club Center in Washington, D. C. (the site of which he helped select) may stay in Turner Hall, named in his honor. Credit for today’s leadership recognition awards (Awards of the Clover) must go in great part to Turner’s leadership in their establishment.

Revealing to a study of Ray Turner’s work is the list of responsibilities he was carrying at the time of his retirement from the Federal Extension Service. His major assignment, as senior agriculturist, was to supervise 4-H activities in the Central States region (Midwest).

Turner did early and diligent work in such projects as dairy, beef, conservation and tractor maintenance. In various phases of agriculture, he helped get state 4-H Club leaders together to confer on subject matter.

What kind of man was Ray Turner? Neat, even meticulous, for one thing. “His records were just wonderful,” says a co-worker on the Federal 4-H Staff, Gertrude Warren. His written records and reports were vital to the collection of 4-H history, another early Extension worked explained.

Although he was not regarded as an outstanding speaker or writer, his contemporaries assert that Turner was a great organizer and “doer.” For years he planned a regular series of 4-H music programs on a national radio network. They featured the United States Marine Band and Turner’s stories of the history of music, plus a 4-H message.

Born in Chase, Mich., on October 5, 1884, to Frank and Elizabeth Turner, the 4-H trailblazer grew up in a rural community. After receiving a Bachelor of Science degree at Michigan Agricultural College in 1909, he taught agriculture in Michigan high schools until 1918, when he became state 4-H Club leader in his native state. Six years of effective work there led to his move in 1924 to Washington, D. C., where he spent the rest of his working years.