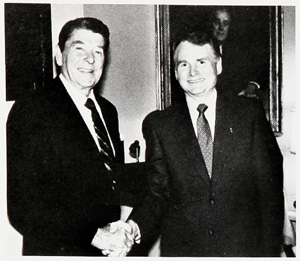 The annual board meeting of National 4-H Council in 1984 was a special day with multiple highlights. Harold A. Poling, executive vice president, North American Automotive Operations, Ford Motor Company, was elected the new chairman of the board of trustees of National 4-H Council on May 31, 1984. Laurie Thomas, president, Amoco Oil Company, was elected a new vice chairman.

The major highlight of the day occurred when the entire board went to the White House for a session with the honorary chairman of National 4-H Council, President Ronald Reagan. The President told the group: “Today’s 4-H is built on the experience of an impressive past. I am proud to commend the large numbers of volunteers who are involved in the 4-H program and committed to its goals. Their efforts serve as an inspiring display of the American spirit.”

Council’s new chairman lived with his family in Virginia during most of his childhood and participated in 4-H there. Harold Poling not only was a 4-H member, but also a winner as part of the first place demonstration team at the National 4-H Dairy Show in 1940. During the board meeting he relived that experience when Tom Tuton, vice president, sales, Elgin Watch International, Inc., presented him with a special 4-H gold watch to replace one he had won 44 years previously at the dairy show. In reminiscing about that experience, Poling recalled that it was the first time he had traveled alone, out of state. Staying in a large hotel in Harrisburg was an experience of a lifetime for himself and Lester Harris, his teammate. The two-hour winning demonstration given by the two boys was titled “Making American Cheese on the Farm.” Poling recalled how impressed he was with the hospitality of the two donor companies involved, the Elgin Watch Company and Kraft Cheese Company. 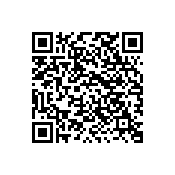