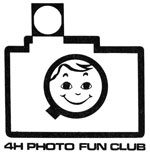 In 1970, Eastman Kodak Company, sponsor of the National 4-H Photography Awards and Recognition program, with the help of the Extension Service and National 4-H Service Committee, produced the first national 4-H television series on videotape rather than film. The series of six half-hour programs was designed for 9- to 12-year olds and takes place in photography project leader Dick Arnold’s rec room (on the TV studio set).

The series introduces young people to cameras, film, picture composition and turns common errors into learning situations. They learn to tell stories with photos, and how photographs can help record progress made in 4-H projects.

Premiered at a national television workshop in Colorado in mid-1970, 4-H Photo Fun Club was shown on more than 90 commercial and educational stations during its first several months. During the first year over 70% of the stations programming the series were commercial stations, most of them using the series in what was considered prime viewing hours for the targeted audience – 44% programming the series on Saturday mornings; 27% on weekday afternoons after school; and 18% on weekday evenings during the early hours. Stations in Chicago, Baltimore, Boston, St. Louis, Philadelphia, Orlando, Sacramento, Kansas City, Milwaukee, Minneapolis, Oklahoma City, San Francisco, Pittsburgh, Honolulu and Raleigh were some of the cities showing the series. Studies showed that 70% of the young viewers enrolled in the series had no previous experience with 4-H and two-thirds of these youth wanted to stay a part of 4-H after the series was completed. The series was successful and a strong visibility plus for 4-H. 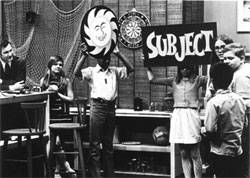 Elbert and Maria, members of the 4-H Photo Fun Club television series, demonstrate during the first program two of the things needed to take a picture — light and subject. 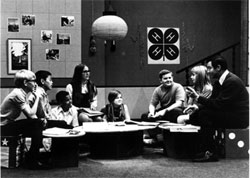