This is the seventh in the series of 10 articles, reprinted from 1962 National 4-H News, which featured people identified by Extension Service professional staff members as “folks who helped make 4-H great.” 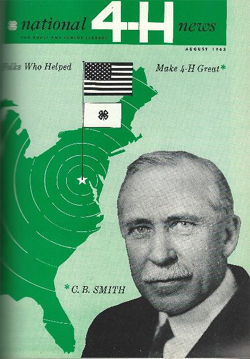 Many 4-H workers have a deep-seated philosophy about 4-H. It’s a special gift to be able to lend words to such feelings about this youth movement. And one of the more articulate speakers and writers on this subject was Dr. Clarence Beaman Smith, who spent 26 of his some 40 years with the U.S. Department of Agriculture in serving Extension work and, as part of it, boys’ and girls’ club work.

In his poetry and prose, Smith put into words the feelings that he and many other pioneers of club work developed as they saw – but not from the sidelines – the movement grow and flourish. For Smith and his fellow trailblazers transformed their feelings into an action program. 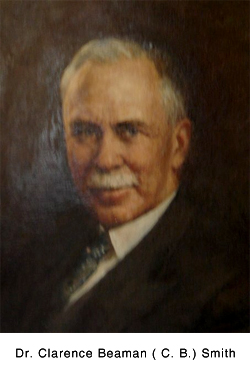 In several ways does today’s 4-H Club work reflect Smith’s contributions.
The youth program’s strong position in overall Extension work is partly a result of his vigorous backing in early years, when many agricultural workers “didn’t have time” for club work. Smith was instrumental in setting up the policy-making 4-H Subcommittee of the formal Extension organization.

As has been said for all the 4-H pioneers discussed in this series, Smith exerted a strong influence for high standards in club work. He didn’t deprecate material things, but he stressed high ideals in youth training. This Federal Extension worker helped establish the memoranda of understanding which put the Smith-Lever act of 1914 into operation by creating Cooperative Extension Services in individual states.

In his position of national leadership, Smith helped create the first National 4-H Club Camp (now National Conference). He opened that 1927 gathering – housed in tents on the U.S.D.A. grounds – with a talk on 4-H in which he stressed that “education is not preparation for life but life itself.”

Smith was born in a one-room log cabin at Howardsville, Mich., the son of Alonzo and Harriett Smith. In the words of one biographer, “Here Dr. Smith learned the fundamental values of life – work, thrift, neighborliness, integrity …”

After attending high school in Gaylord, Mich., Smith borrowed $40 from his parents and started out for the state agricultural college at East Lansing. He worked his way to a B.S. degree in 1894 and an M.S. degree in 1895. After one year as a high school principal, he joined the U.S.D.A.’s Office of Experiment Stations. In 1912 he was made Chief of the Office of Cooperative Extension Work for the entire country, and in 1932 was appointed Assistant Director of Extension. He held this position until his retirement in 1938, after which he continued to write and speak for 4-H.

What kind of man was this 4-H pioneer, who died in 1948? Two of his early co-workers, Gertrude Warren and Paul Taff, describe him as “a great character” with a kindly face and a businesslike manner, a deep thinker and careful organizer. His decisions were fair and were based on strong convictions.

But the continuous thread of philosophy, made evident in his poetry and prose, seems the outstanding trait of C. B. Smith, who wrote:

“The biggest thing (parents) can leave (their children) is an ambition to do and accomplish, to endow them with healthy minds and bodies … Yes, there is growth in struggle. And it is our business in 4-H Club work to place before rural people the things in life most work striving for.”