This is the fifth in the 1962 series published in the National 4-H News highlighting the work of 4-H professionals who, in the judgement of surveyed Extension workers, contributed significantly to the growth and development of the 4-H program nationwide. We reprint each article as it was written in 1962. 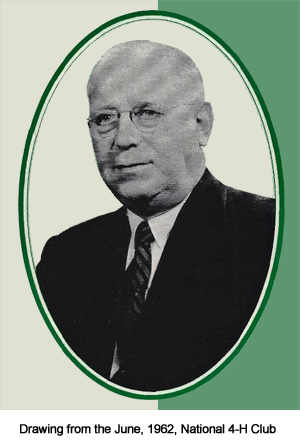 Humble beginning marked the life of many a 4-H pioneer, and Arne Gerald Kettunen was no exception. The son of an immigrant Finnish tailor, he learned early in life the value of hard work. Especially he came to realize the value of a helping hand, and so set ambitious goal himself in the service of youth.

Nearly 1½ million 4-H Club boys and girls reaped the benefits of club work in Michigan during the 31 years “Kett” spent as state 4-H Club leader there, from 1925 to 1956. In those years, not only they but 4-H’ers across the nation received a helping hand through Kettunen’s diligent work.

As was the case with so many workers in the early days of 4-H, when a lack of today’s clearly established patterns required a broad scope of operation, Kettunen’ achievements threaded through so many phases of 4-H that it is hard to pick out one or two that stand above the rest.

One great contribution this native of Michigan made to 4-H was in obtaining financial support, both public and private.

For instance, he helped obtain a yearly state 4-H Club allocation from the Michigan legislature for counties to use in providing “suitable awards for

members and leaders.” He raised $28,000 of state money, in 1942, to finance the State 4-H Show, claimed to be the largest annual 4-H event in the nation not connected with a state fair. In helping establish the Michigan 4-H Foundation in 1952, he opened a way to put private funds to work for the youth of his state. (He also established many county 4-H foundations to aid agents in administering an effective 4-H program.)

Kettunen was a strong, capable executive, his former co-workers explain. He established a district 4-H supervisor’s plan and a strong county 4-H Club agent system in Michigan. He led the way in Michigan’s 4-H camping program first with a camp at Chatham for the Upper Peninsula, then with many others. Most Michigan counties now have a camp of their own or own one jointly with other counties.

Born at Ishpeming, Michigan, October 28, 1894, “Kett” spent his whole professional life in the service of youth. Immediately after his graduation from Michigan State University in 1917, he went to work with the Extension Service of that state, becoming state 4-H Club leader 8 years later.

In 1923, he married Ruth Cresswell, who later became a staff member at Michigan State University also. He was survived by a son, daughter and five grandchildren at the time of his death at age 64.

Always a backer of the International Farm Youth Exchange program, Kettunen journeyed to Finland and other European and North African countries in 1952 to study its activities. He was honored by the Finnish government for his contribution to the organization of their 4-H work.

In the words of another 4-H pioneer, “Kett” was not so much a speaker or writer as a “do-er.” He never spared himself, which may have contributed to a heart attack at about the time of his retirement from Extension work in 1956.

Himself a man of great integrity and high standards, Kettunen helped transmit those qualities to 4-H Club work.