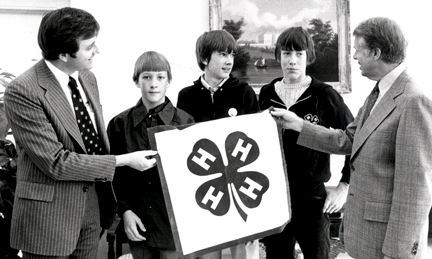 I just recently got home from the National Association of Extension 4-H Agents (NAE4-HA) Conference, held in Portland, Oregon this year. Just like so many others who attended, I ate too much, slept too little, and learned not nearly enough (although that wasn’t for the conference’s not trying!). The NAE4-HA Conference is one of the highlights of the 4-H year each year, especially if one is seeking more information about all that we do as 4-H “agents.”

If John Quincy Adams, our 6th U.S. President, is to be believed, the NAE4-HA Board has much to be thanked for. JQA once said:

“To furnish the means of acquiring knowledge is…the greatest benefit that can be conferred upon mankind.”

“I thank God I have a head, a heart, and hands which, if fully exerted all together, will succeed in the world.”

Dwight Eisenhower (#34) would have agreed with John. He once said:

“Hand and head and heart were made to work together. They should be educated together.”

I think lots of our Presidents would have liked 4-H. Theodore Roosevelt (#26) would have been right in there with them had he been aware of what was happening in various communities across the country concerning clubs and kids while he was president (1901 – 1909). In fact, he got the Extension youth development ball rolling when he told America:

“If you are going to do anything permanent for the average man, you must begin before he is a man. The chance for success lies in working with the boy, and not the man.”

I KNOW Eisenhower liked 4-H. At least he liked the 4-H’ers. Ike said so! He began his 1959 National 4-H Center dedication speech saying, “…I like the 4-H’ers.” Then he went on to list why he liked them. For example, one reason he identified was

“I like 4-H’ers because they are dedicated to excellence. They want to do things better.”

Lots of Presidents liked us for that reason. Harry Truman (#33) told 4-H’ers gathered in the Rose Garden in 1952:

“As one who helped organize one of the first 4-H Clubs in my state, I congratulate you on your theme for this year, ‘Better Living for a Better World.”

I think Truman really did like, and personally know, 4-H. He apologized to another group of 4-H’ers saying, “There is one thing I overlooked this morning. I forgot to put on my 4-H button, for which I apologize.” Truman made many speeches from the end of a train as it moved from town to town while he was in office and in many of those speeches, he’d reference 4-H. Yup, Harry liked 4-H.

“Through your emphasis on head, heart, hands, and health you are making a valuable contribution to our country’s welfare and progress.”

“You know, if every kid in America were in 4-H, we’d have about half the problems we’ve got. I believe that.”

Funny but I just can’t imagine Clinton and Richard Nixon (#37) agreeing on much, but they apparently agreed on 4-H!

When Nixon was Ike’s VP he told a group of 4-H’ers:

“With young people like yourselves growing up in America, I know tomorrow is in safe hands.”

Hmm, could that be a “4-H GROWS HERE” reference?

“In America we have only one title to nobility and that is ACHIEVEMENT. You 4-H’ers have won that title.”

And Herbert Hoover (#31) rounds out the group by adding:

“The work of the 4-H Club is fundamental. It is developing…leadership, molding character, and building citizenship.”

Calvin Coolidge (#30) was a president many thought of as a stern man of few words. But 4-H’ers did make him laugh when they paraded past him with a sign that read, “We like Coolidge ’cause Coolidge likes us.” It must have been true ’cause 4-H’ers never lie, right?

However, the man who succeeded him in office, Herbert Hoover, summed things up best when he told 4 H’ers:

“The club work which you share with almost a million other boys and girls in 4-H Clubs in every part of the Nation is one of real accomplishment. … Your program and your future leadership is its great promise.”

Every President since William Howard Taft (#27) – all 18 of them, including our present President, Barack Obama (#44) – has met with 4-H members, discussed the future with them, given 4-H’ers encouragement, asked them for help (FDR [#32] even asked 4-H’ers to rededicate their heads, hearts, hands, and health to VICTORY in 1945!), and thanked them for what they’d given America. In January, 2017, #45 will be inaugurated. We don’t know who that will be yet, but we can be sure 4-H will be present at the start (Check out the Inauguration CWF opportunity recently announced). Will he or she meet with 4-H’ers? He or she will if we, as John Adams suggested, exert our head, heart, and hands all together toward that goal!