During the 2015 National 4-H Conference eight 4-H’ers were guests of President Barack Obama in the Oval Office of the White House on April 13 to share what their 4-H clubs are doing to tackle hunger in their communities. The group (l. to r.) are: Geneva Wright, Alaska; Gabrielle Parker, Maryland; Jacob Jensen, Utah; Kashawn Burke, Georgia; Kimberly Lopez, Idaho; Lorena Rivera, Idaho; Spencer Orr, Iowa and Andres Parra, Arizona. At the far right in the photo is Secretary of Agriculture Tom Vilsack. (photo by Pete Souza)

A tradition that has been going on for well over 100 years… On April 13, 2015, during National 4-H Conference, eight 4-H’ers visited President Obama in the Oval Office of the White House.

In 1912 a group of Southern Club Champions visited President William Howard Taft… and, every President between Taft and Obama has also been involved with 4-H. 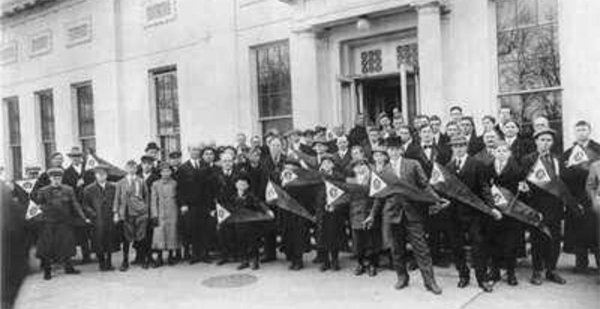 A section titled U.S. Presidents and 4-H is located on the National 4-H History Preservation website: http://4-HHistoryPreservation.com  It is not yet complete but has a number of documented stories about presidential involvement.

In 1922, Calvin Coolidge was the first president to be named an Honorary Chairman of the National Committee on Boys’ and Girls’ Club Work (later National 4-H Council). For several decades, successive presidents also accepted this honor. President Herbert Hoover wrote in his acceptance letter “The work of the 4-H Clubs is fundamental. It is bringing about a more economic production of all agricultural crops; it is improving rural homes; it is developing rural leadership, molding character and building citizenship.”

Presidents have been included in significant 4-H celebrations. President Dwight Eisenhower cut the ribbon that opened the National 4-H Center in 1959. President Richard Nixon addressed the delegates at the 50th National 4-H Congress in Chicago in 1971. During the national 4-H centennial celebration, President George W. Bush welcomed a delegation of 4-H members in the Oval Office, where he was presented with a National Friend of 4-H plaque.