The following story is from the National Compendium of 4-H Promotion and Visibility on the National 4-H History Website at http://4-HHistoryPreservation.com/History/4-H_Promotion/ . 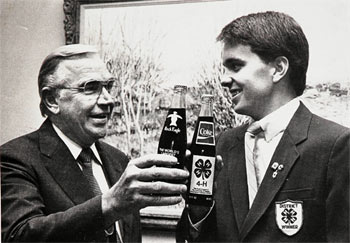 In 1984-85, 4-H’ers in Georgia were selling Coke bottles as part of a fund raising campaign. However, these were no ordinary Coke bottles. The bottles read, “Rock Eagle: The World’s Largest 4-H Center, 30 Years of Service to 1,000,000 citizens of Georgia 1954-84.” The front of the bottle flashes the 4-H emblem – a 4-leaf clover, just below The Coca-Cola Company logo.

The 96,000 special bottles were printed by The Coca-Cola Company as part of a five-year fund raising program to raise $2 million for the renovation of the 4-H camp and conference center in Eatonton. The 4-H’ers were selling the Coke bottles for $1 donation, or more, at county fairs, harvest sales, grocery stores, convenience stops and school stores.