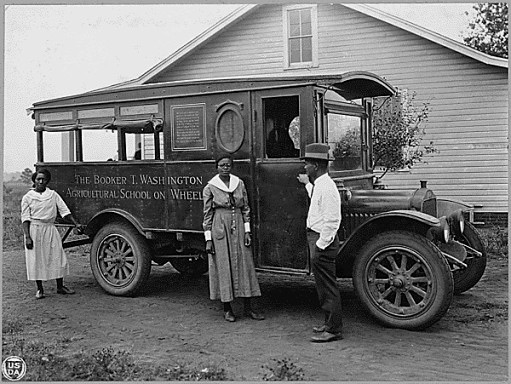 This National Archive photo of Booker T Washington’s “School on Wheels” depicts one of the early innovations of the 1890 Institutions which took education to the rural areas.

February is National Black History Month, so what better lead than a feature on the 125th anniversary of the creation of the 1890 Universities, those educational institutions created to serve the country’s African-American population. Important 4-H programs were delivered from those schools before integration and continue today.
National 4-H Week was created in 1945 – but in March instead of October – with the theme “Head, Heart, Hands and Health for Victory!” It’s not too early to start contacting local media to feature 4-H (and 4-H history) this fall as well as any time during the year.

In 1930, Fort Worth 4-H girls featured “Secrets of Feminine Charm” in a stock show booth. Do you think they could convince women to use an apple as a skin softener, or milk as a vanishing cream?

The National 4-H History Preservation Website unveils its newest informative chapter: a Compendium of 4–H Promotion and Visibility stories which delight and educate. These are vignettes from history files of the myriad ways 4-H promoted itself from local communities up to the national and international levels. It’s pleasant reading.

“Voices of 4-H History” continues with Hawaii as its newest participant; the 2015 National 4-H FilmFest screens in June; University of Tennessee Collegiate 4-H joins the effort to preserve the history of campus 4-H clubs – and much more in this issue.

Whether you’re snowed in, being blown around by heavy winds, slogging through driving rain or basking in the warming sun (all of which are possible in February), we hope you enjoy this issue.